Over 25 years helping clients.
No legal fees or costs.
No-fee policy. Never pay out-of-pocket fees or expenses.
Get a confidential review of your case at no cost.
Helping clients for over 25 years.
Get Your Free Case Review
Call Now
Start Online
Home › PG&E Wildfire Lawsuit Information

Saturday January 28, 2023 — PG&E is alleged to have caused the destructive North Bay Fires that began on October 8, 2017. Lawsuits are now proceeding to compensate victims who suffered personal injuries, property loss, business losses, or other damages in the following and related fires:

Evidence suggests these fires were part of a related, system-wide failure caused by PG&E’s improper maintenance of its utility equipment and surrounding vegetation.

If your family, home, or business was affected, you may be entitled to recover monetary damages beyond your insurance policy limits.

We encourage Northern California residents to learn about the PG&E wildfire lawsuit and understand your legal options. 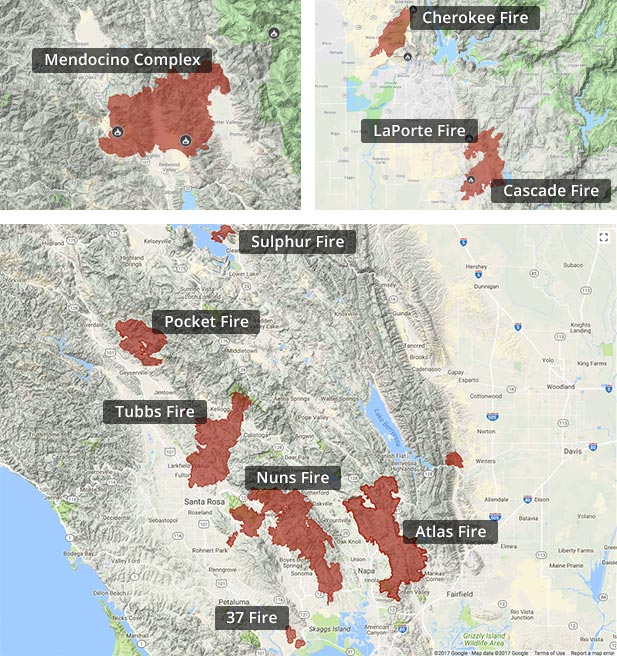 Despite the high winds and dry conditions, mounting evidence shows these fires were caused by PG&E’s improper maintenance of its electrical infrastructure, failure to clear trees and vegetation as required under state law, and failure to take protective measures in light of known weather forecasts. The North Bay Fires lawsuit against PG&E includes the following allegations:

Based on these and other allegations, the PG&E lawsuit states various causes of action (or legal counts) against the company:

On January 29, 2019, PG&E filed for voluntary Chapter 11 bankruptcy. As a result, all claims for damages arising out of the 2017 North Bay Fires and the 2018 Camp Fire will be resolved as part of the bankruptcy process.

With the bankruptcy proceedings underway, we encourage you to consult an attorney about your claim and understand your legal options. Our attorneys have over 25 years’ experience in mass tort cases, and we provide all consultations at no cost and with no obligation.

Reach our office by phone or through our brief online form at any time to learn how we can help.